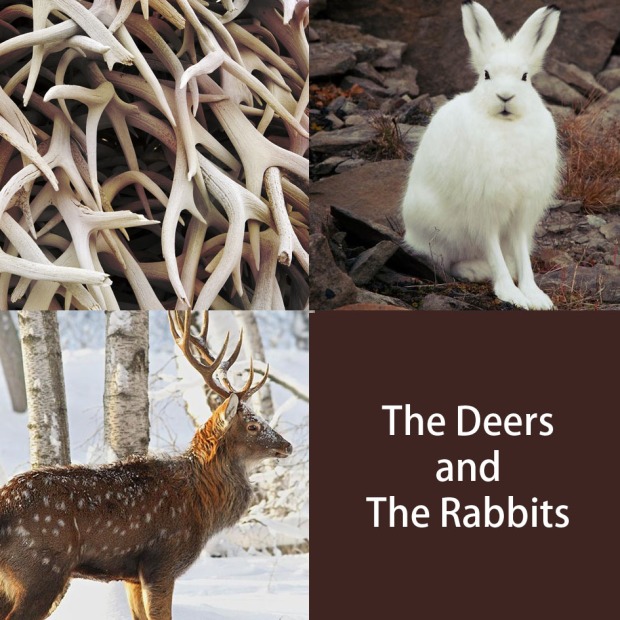 Once upon a time, long, long time ago, all rabbits had a horn growing on their foreheads.

Rabbits were very proud of their looks. They spent a lot of time grooming their silky white furs and polishing their horns until they shone like pearls.

Whenever they crossed other animals, rabbits would brag:

– See how beautiful we are! Have you ever encountered anyone with a coat as soft or a horn as precious as ours?

In that faraway past, beasts were very different from those we know now. Deers for example had no antlers. They were strange looking creatures, all lanky legs, spotted russet fur and big watery eyes.

Contrast with rabbits was of course striking, and the impish animals could not help but gloat over them:

– Deer, deer! You might be bigger than us, but how strangely naked you look! How prettier you’d be with a horn such as ours!

Deers never responded to those taunts. But, deep inside, they envied rabbits.

One day, a bolder stag mastered all his courage and said to a rabbit:

– You must have the most splendid horn I have ever seen. Would… would you lend it to me? I would really like to know what it’s like to have one.

The rabbit strutted, his vanity pleased by those praises, and happily clapped his paws:

– Of course, my poor friend! As long as you don’t leave my sight, I’d be happy to let you try it on!

The rabbit took of his horn and carefully placed it on the stag’s head.

– My my, your forehead is much larger than mine. You’ve got room for more than one horn on that big head of yours. Wait! I know!

The rabbit called his friends.

And he placed the second horn on the stag.

Rabbits were laughing their hearts out:

– Look at this! He looks so weird! Who would want to wear two horns at a time, it’s a complete nonsense!

Lured by the noise, other deers had approached. As soon as rabbits saw them, they took of their horns and said:

– Come on! You must try those on! Your kind look so funny with them!

Under the panicked eye of their does, stags sighted and bowed, letting the smaller animals make fun of them.

– You all can see how I look but I don’t. It’s unfair! Would you let me see myself in the river so I can have a good laugh too?

– You’re right, you’re absolutely right! To the riverside everyone!

And the whole company marched to the riverbanks.

The stags craned their heads to the water, clear and smooth as a mirror. Rabbits were still laughing and laughing:

– See! How goofy you all look!

The stag tilted his new crown to the left, then to the right, inspecting his reflet thoughtfully:

And he jumped across the river.

All stags and does followed his lead. Soon, the whole herd was standing on the other bank.

Under the rabbits’ horrified eyes, the bold stag smiled cheekily and made a grimace.

– Come back here you thieves!

But, they could only stand there, helpless as they did not know how to swim. And the whole herd disappeared swiftly into the woods.

– Our horns, our pretty, pretty horns are gone…

They searched the deers for days, but alas! the beasts had simply vanished in the mountains.

The unfortunate rabbits cried and cried and cried, so much their eyes turned bright red. And that’s why, still nowadays, stags have beautiful antlers and white rabbit scarlet eyes.

Sika deers (also called Japanese deers) have been part of Japan’s tradition for centuries. Those animals were hunted for their meat but also skins, antlers, sinews, etc, which were extremely useful in people’s everyday life.

Deers have also been linked to warriors and archers at least since Heian period – which is why you can still see today deer shaped targets but also deer items (mats, quivers) in ritual archery contests. This might come from the antlers symbolic aura of vitality and masculinity.

This is not covered in today’s tale, but deer are also especially regarded in Shinto. They are seen as messengers of the Gods and very pure and auspicious animals. It’s partly why holy places like Nara have huge sacred deers colonies (sometimes not for the best…).

One of this tale versions has the deer’s making a cheeky grimace, using a playful childish gesture named akanbe (which must be familiar if you’re Japanese -of course- or French… or you watch anime!). I’d give a lot to see a sika deer do that irl!