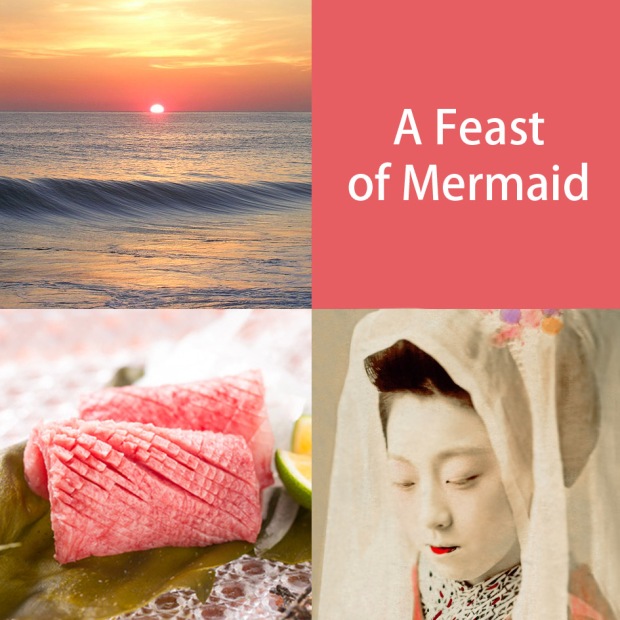 Once upon a time, there was on Wakasa coast a small flourishing harbour which stood upon the clearest sea.

Blessed by lenient tides and fair weather, its fishermen came back every nightfall with lines and nets full of silvery fishes.

Townspeople where so glad for their luck that they never forgot to thank the many gods of the ocean.

Once every year, all homes draw their sliding doors wide opened, unveiling their cherished hearth to the four winds.

All day long, all rejoiced, dancing and drinking. And as the sun slowly went to sleep, fishermen would carry the town’s shrine portable altar into flaming waters, reuniting deities for one night with their homeland.

One year, as the sea darkened, a boat like no one has ever seen appeared by the horizon.

Without a word, they extended fin-like hands to the mesmerized fishermen. And one by one they got onto the strange boat, never looking back toward their homes on the shore.

As sails magically set, the fishermen froze among the merfolk. Everywhere was more richness that they could ever have imagine.

Like famished gulls, the humans scattered through the rooms, hungrily touching finest coral and iridescent abalone shells, under the amused looks of their silent hosts.

As one fisherman wandered by, astonished, he suddenly heard muffled gurgles coming from the hull. Curious, he carefully came closer… and swallowed a gasp.

A merfolk stripped to the waist, his greyish torso covered by a myriad of scales, stood among cooking pots knife in a hand. In the other one, he held in a strong grip the strangest of fishes.

Its lower body was all smooth eel skin, slimy as seaweeds. But the other half was definitely human like, with the angry wrinkled face of a crying baby.

Before he could move, the cook had skillfully gutted and cut down the mermaid, adding pieces after pieces on a fuming grill.

Disgusted, the man hastily retraced his steps only to find his friends in a lavish banquet hall, seating among merfolks in front of mother-of-pearl trays.

The fishermen were used to work together and knew each others like to back of their hands. As he took place, they instantly seized up his sickened face.

But the feast had already began.

Refined dishes kept coming, each delicately arranged. The fishermen gingerly ate their fill, not accustomed to such tastes but unwilling to be impolite to their hosts. Until the meat was served.

The man felt his stomach turn. He frantically raised his head and crossed the others’ gazes. Pointing to his plate, he cautiously shook his head.

The fishermen all got the hint. As discreetly as they could, all faked eating the grilled meat. With swift movements of their chopsticks, they slipped it into their kimono sleeves – until all plates looked licked clean.

Merfolks remained oblivious of their trick. And the rest night went by uneventful, filled with human songs and eerie hushed laughs.

Just as the sky lightened, the boat moored once more by the village. One by one, fishermen got off, shyly waving merfolks goodbye as they vanished into mist in the first sunrays.

But ass soon as the boat disappeared, all took out the disgusting meat weighing their sleeves down and threw them into the ocean, muttering prayers under their breaths.

All but Takahashi, the younger of them, who simply pretended to throw his piece away before going home on shaky legs.

He put the meat into a box as a memento of that strange night, and put the box deep into a cupboard.  Then he sprawled face first onto his bed, dead drunk.

Months passed. Yet one day, as Takahashi’s young daughter was spring cleaning the house as her father was out at sea, her nimble fingers found the little box under layers of jumble.

She opened it. Inside, the piece of meat looked as juicy as ever.

The girl couldn’t resist: she gobbled it down in one bite. Then, feeling remorseful, she hid the box back where she had found it and never spoke a word about her secret snack.

At first nothing happened. Life kept going by in the harbour. Takahashi’s daughter became a lovely young lady and quickly found a husband.

But as years went by, people started to whisper.

Her husband’s back bent, her children grew up, yet she stayed as young and lively as ever, unmarred by a life full  of hard work. Worse, by dusk, some swore they had seen her skin glow like a moonlit ocean.

Her parents died, then her husband, then her children and grandchildren, yet she remained untouched by time.

In the village, now all shunned her, cursing her under their breath as she went by, lonely and sad by the shore, mourning people only she had known and loved.

One day, she could not take it anymore. She shaved her hair, put on a veil and left.

They said that the girl who never aged traveled across the country for centuries, trying to find peace of mind as a wandering nun.

And that, when she finally returned to her homeland, she planted a white camellia near a sea cave before jumping into the abyss and never coming back.

Such was the blessing of mermaid flesh.

This tale relates to childhood of Yao Bikuni, a buddhist nun thought to have lived 800 years – all because she had once eaten mermaid’s meat given to her father by oblivious merfolks kindly willing to reward their village piety.

If Japan has a myriad of sea creatures in its folklore, from short tempered sea gods (Susano) to monstrous or benevolent spirits, true mermaids (ningyo) stories are kinda rare.

With their fishlike bodies and crumpled human-like faces, they have little in common with their Western cousins. Japanese mermaids in fact start gaining popularity during Edo where strange mummies were crafted by carnitalkers (who sew monkeys upper torso to fish tails) and displayed in misemono (freak show) or sold to temples (some still can be seen).

Religious festivals are still a very important part of Japan daily life. If matsuri are now sometimes mostly an excuse to party, in the past they were crucial to appease the gods. In coast communities, it was not unusual to carry portable altars (mikoshi) into the nearby sea to “free” the local god – and reassure its benevolence for yet another year.