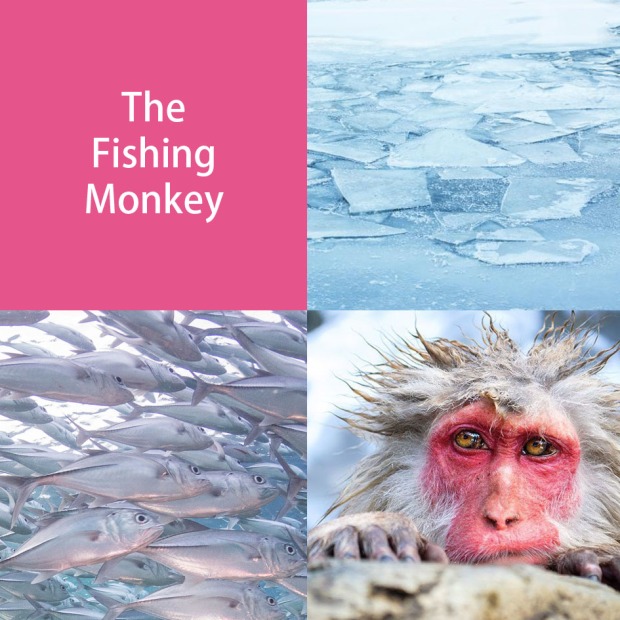 Once upon a time, there was a monkey who lived high, high in the mountains.

Winter came early in those rocky lands, its icy winds blowing harsh and strong. In a matter of weeks, leaves were gone and rivers had slowed.

Soon, all Life fell asleep under a thick coat of ice and snow.

Perched in the evergreens, the monkey was frozen to the bones, from his pale face to the tip of his long tail. Finding nuts and fruits in the now barren lands was getting more and more difficult as the season went by.

The poor creature had not followed the wise examples of bears and badgers and squirrels, getting fat, digging burrows and hiding stashes.

One freezing day though, bell-like laughters rang in the cold air.

Puzzled, the monkey went on to investigate, jumping from tree to tree… and witnessed quite a strange scene.

A romp of otters was frolicing cheerfully on the icy lake. Each one of them had a silvery fish in its paws and many fishbones could be seen here and there.

Under the monkey’s mesmerized eyes, the carefree animals were throwing a true banquet.

– Such plenty when I am starving there…

The monkey went down his tree and hailed the otters:

– My, my, lucky you! Your kind seems unmoved by this awful weather. How are you all able to catch so much fish despite this ice and snow?

– Well friend, it’s quite easy, really. See, we pierce a hole in the ice, then put our tails in the water. If you stay still, fishes take the bait. And the only thing left is taking them out!

Another otter was eyeing the monkey with plain curiosity:

– What a long tail you have! With such a line, you’re probably a born angler like us. You should definitely try!

The monkey, pleased by those compliments, parted with the otters and went on his way. Being was a lazy beast at heart, he snickered:

– This fishing method sounds indeed so easy, even a child could succeed! You don’t even have to move!

And, hedecided to experiment his new knowledge at once.

He found a quiet place on the lake and drilled a little hole in the icy surface. Then, he plunged his tail in the water:

The monkey kept very quiet and did not move an inch despite his numbing tail. Yet, no fish came to bite.

The snow began to fall gently, blanketing all the sounds of the forest.

Slowly, the animal dozed off.

Minutes went by. In the frosty air, the surface of the lake started to freeze back again, quickly closing the hole tight around the monkey’s tail.

The monkey awoke with a start, feeling something tugging at his tail.

Thinking a fish had taken the bait, he pulled on his tail. Nothing moved.

– I must have caught quite a big one!

The monkey pulled on harder and harder, his face bright red with effort.

… the monkey’s tail broke in half.

The poor animal, numbed by the cold, had not realised his tail had been encircled by the ice.

Ashamed and frozen, the monkey ran to the closest hot spring, hoping to hide is misfortune behind the thick mist of steaming waters.

And, since then, mountain monkeys have red faces, short tails and spend their winter days soaking into hot baths!

This tale has many variations all around the world. Most of the time, the unfortunate animal is a bear and like today,  the story is there to explain why bears don’t have long tails anymore… and warn children against the danger of sloth!

Japan’s lands host many monkeys. Those animals are very common and have behaviours so human-like it’s no wonder they are part of so many Japanese tales (where they are mostly here to embody the flaws of mankind).

Japanese macaques are nicknamed “snow monkey” as many colonies live in cold areas where snow is common. They are highly social animals, capable of creating and passing to their youngs cultural practices (Koshima Island’s monkeys is a well documented example).

Bathing in hot springs is actually not a custom widely spread among monkeys. Onsen bathing is in fact quite a recent phenomenon which take place at the Jigokudani Park in Nagano prefecture. Yet, I find this habit quite cute and decided to include it in today’s tale anyway!

Wish for more monkey stories? You can find another “Why does the monkey have…” tale here 😉