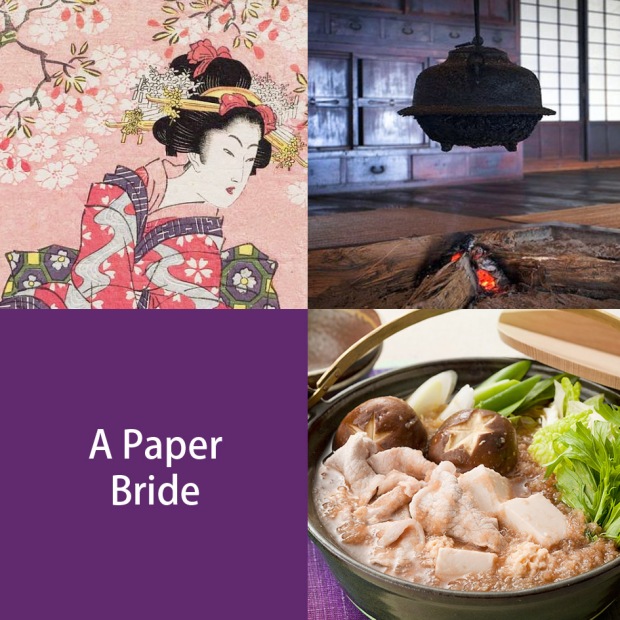 Once upon a time, in a poor household of old Edo, lived an old woman and her grandson.

The young man was lazy and relied a lot on his grandmother. He never helped at home and spent all his days drinking and wagering at local gambling den.

The old lady was out and about all day, preparing meals or doing laundry for rich people. Leaving home at dawn, she always came back very late and weary.

As whole neighborhood knew about the young man’s bad habits, the grandmother had never found a family willing to let their daughter wed her grandson. And the both of them lived a very sad and lonely life.

One day, one of her employers called the old lady:

– You’re a hardworking woman and we’re very pleased with you. Here take this woodblock print. I know you like it very much, you’re always admiring it when you clean my office.

The grandmother beamed with joy. The print was indeed one of the most beautiful thing she had ever seen. Drawn in fluent lines, it depicted in bright colors and outstanding details an elegant lady resting in a serene garden.

She came back home, holding it close to her chest, and carefully hung her new treasure on the wall.

Soon, the drawing became a true part of the family. The old woman was always talking to the painted lady, confided in her both everyday worries and little secrets. Life was still harsh yet she felt a bit better trusting her paper friend.

One evening, she came back home and stopped dead on her threshold. The little house, usually dusty and dirty, was neatly cleaned. Everything was spotless and, on quietly glowing embers, a warm pot was joyfully simmering.

She turned to her grandson who was idly resting by the fireplace:

– Did you cleaned the house by yourself?

He nonchalantly shook his head:

– Did not grandma. Must be your pretty paper friend.

– She might not be real yet she’s the closest bride we’ll ever get!

And he started to laugh without joy.

Yet the next day, and the day and day after that, everytime the old woman got home, she found a welcoming household and a warm meal waiting for her.

If his grandmother took the habit of thanking the paper lady gracefully every night, the young man was growing more and more restless:

– This is not right, how can such magic be? Someone must be tricking us!

One morning, after his grandmother went to work, the lazy man pretended to left the house. He then quickly returned home and, as quietly as he could, he hid in the attic.

He waited and waited, peaking now and then between two planks. And suddenly, around noon, he heard soft steps.

A young woman, finely dressed, was bustling about, dusting the house, tidying up and cleaning dishes and pot.

The young man could not help it, he screeched:

The woman, surprised, turned to him in a swirl of precious silks. But, before she could utter a word, she loose her footing and fell into the hearth.

The grandson hurried himself down the ladder but before he could reach her, the strange woman had already turned into a bright burning flame.

In a flash, she was gone, no more but soft ashes in the fireplace.

Astonished, the young man looked at his grandmother’s print on the wall. The garden, serene as always, was empty. Where the beautiful woman had once stood was now only a blank white space.

Woodblock prints were widely popular during Edo period. They were a well loved form of art and could be purchased by both rich people and working classes. Japanese woodblock prints are often referred to as ukiyo-e but many other words can be used, depicting styles or special techniques. I’ve for example already covered bijinga (“picture of beautiful women”) in this tale.

Today’s story is about a woodblock style called nishikie (colored prints) or Edo-e (Edo prints), which uses an intricate printing process and presents many colors. As each color had to be carved from a single block, those complex prints were time consuming little pieces of art!

It was customary for brides to settle in their husbands’ families. There, they were expected to take care of the household. They had to obey their father and mother in law and many tales stress abusive family. It was nice for once to find a story where the mother in law is a good person !