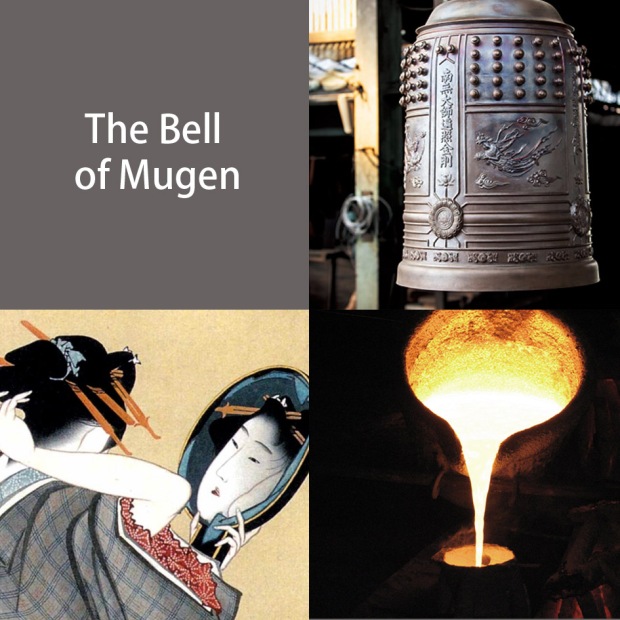 Once upon a time, there was a little town called Mugen where stood a famous temple. It was an old respectable institution and its monks were proud… but also haughty and arrogant.

One day, it came to their ears that a faraway shrine had just blessed a new beautiful bell. One monk raged:

– Our temple is the best for miles around. How could we let a second class shrine outshine us? We should have the greatest bell!

All his brother nodded vigorously. And in the blink of an eye, everything was said and done. They all seized their hats and staves and went knocking on good people’s doors. For weeks, the monk’s mumbling filled the streets:

– Offerings, offerings. We are here to collect offerings, for the glory of the Buddha.

– Bronze and silver and gold. Metal for a bell which will carry your prayers to Heaven.

– A bell, with the purest sound. A bell, to protect Mugen from demons.

Townsfolk had a lot of respect for the monks. They rummaged through their belongings, eager to outmatch each others by donating lavish gifts, willingly handing out precious heirlooms and rare antiques.

Yet, in one little house, a young lady did not shared her neighbors’ fever.

She owned an amazing bronze mirror, smooth as calm waters, finely chiseled with delicate plum blossoms, bamboos and pine branches. It was her most prized possession. For generations, women of her family had used it, lovingly passing it on to their first  daughter.

Between her tears, the young woman could nearly see her mother’s smile reflected on the precious mirror.

The voice of a monk rang urgently into her house:

With a heavy heart, the young lady got up, clasping her mirror tightly on her breast. Outside, she only encountered smiling eyes and happy faces. Everywhere, villagers were merrily chatting and joking, one holding a shimmering hairpin, another a beautifully crafted kettle.

The young lady sniffled. Reluctantly, she got into the line heading to the temple grounds. In front of her, people were adding their donations to a growing pile. But, when her turn came, she could not make a move, her arms clutched protectively around her mirror.

People started to whisper. A monk rose and loudly admonished her :

– Are you a true believer or not? Come on girl, you are holding down the line!

Ashamed, the young lady quickly threw the mirror on the pile and ran off, hiding her cries behind shaking hands.

Soon, all villagers had made their offerings, their prized treasures glittering under the sun.

The monks called the blacksmiths. Under the crowd cheers and the monk chanting, they built a blazing fire. Then, they started to melt the donations in a huge crucible. Small hairpins and big kettles alike all disappeared into a white hot mass.

Suddenly, a stocky man let out a cry:

– How can it be! This one is not melting!

And indeed, in the glowing pot, everyone could see that a mirror engraved with plum blossoms, bamboos and pines remained untouched by fire.

As one, people gasped and turned to the young woman. The monks were fuming:

– Selfish girl! Your egoism is unveiled for all to see! Don’t you respect the Buddha’s words? Offer your mirror wholeheartedly and maybe, maybe you’ll be forgiven!

All around, townsfolk were watching her with plain discontent. Between bitter tears, the young lady finally spat:

As soon as those words escaped her lips, she felt her heart grow cold. And the mirror melt, joining the molten bath.

Days and days passed. Finally, one brisk morning, the great bell was revealed. Immense and magnificent, its heavy silhouette overlooked the town. In clear weather, its deep ringing could be heard from far, far away.

Monks and townspeople were both delighted: Mugen truly had the most amazing temple of the province.

Yet, for the young woman, nothing was the same. All ignored her, only throwing her side looks full of disdain. As a defense, the poor girl turned sour and lonely. Many years passed and people forgot her history. She became the town’s madwoman, always muttering nonsense and harsh curses under her breath.

One evening, the old woman went to the river and jumped, never again to be seen. But, in her belongings, people discovered a strange message:

Ring it, ring it ‘til it cracks! Break the bell! Become richer than you ever dreamt!

Townsfolk whispered and whispered about the madwoman’s words. And one day, a greedy man took his chance and started to ring the bell. In a steady rhythm, he kept striking metal with the roped beam.

Heavy, loud, the bell sang and sang, its deep longing call echoing across the land. In a trance, others villagers soon joined him:

– I won’t let you keep the bell’s treasure!

Holding mallets and big staves, they all struck frenetically. The ringing was deafening, resounding deep in their bones. More and more people came, eyes mad, each yearning to strike. Overwhelmed monks didn’t know what to do to contain the raving mob.

The bell sang in a mad unsettling rhythm. Furious people fought to get close to the bell, vicious blows exchanged here and there. The ringing sound picked up pace as the rabid crowd chanted:

The bell rang and suddenly…

… Vibrations had damaged the wooden frame holding the bell. Shattered wood splattered everywhere. In a heavy dust cloud, the huge bell came down crushing people under its weight. It was still uncracked.

The song of greed had stopped. In a dreadful silence, monks and villagers slowy came back to their senses. Someone wailed in near hysteria:

– Cursed! This bell is cursed!

The abbot tried his best to calm people down. He ordered his monks to chant protective sutra.

– This ill-fated thing must disappeared… You and you come here!

Under the abbot’s guidance, monks and villagers joined their effort to roll the huge bell down the temple’s hill, where stood a deep swamp. And, some people said that, as the beautiful bell of Mugen slowly sank into the mud, a feminine silhouette escaped from the mist and disappeared into thin air.

Bells are extremely important objects in Japan. Bit it big bonsho or smaller suzu, people believe bells have the power to cast away demons and evil spirits. That’s partly why the deep gong-like sound of big buddhist bells plays an important part in many rituals such as dead festival (ōkubo-ōgane for obon) or New Year Joyanokane ceremonies.

Because of their aura, bells can be found in many tales. A famous one is Musume Dojoji, where the spurned lady Kiyohime turned into a serpent out of spite and purchased her lover who hid under a temple bell. This story is a classic noh play and has also a beautiful kabuki version.

Mirrors also play an important role in Japanese culture. One of the most prized artifacts of the country is the Yata no kagami, a mirror supposed to have helped to lure the goddess Amateresu from her cave. Precious objects, they’ve kept for centuries an aura of magic and mystery. They were for example said to show your true soul… or catch it depending of the story!

Mirrors were especially associated with women. So it’s no wonder that in today’s tale, the young woman left a piece of her soul in her beloved mirror. And, because of her grief, her last words imbued the bell with a power, revealing the dark face we all can hide inside of us. A very classical example of Japanese ghost story!