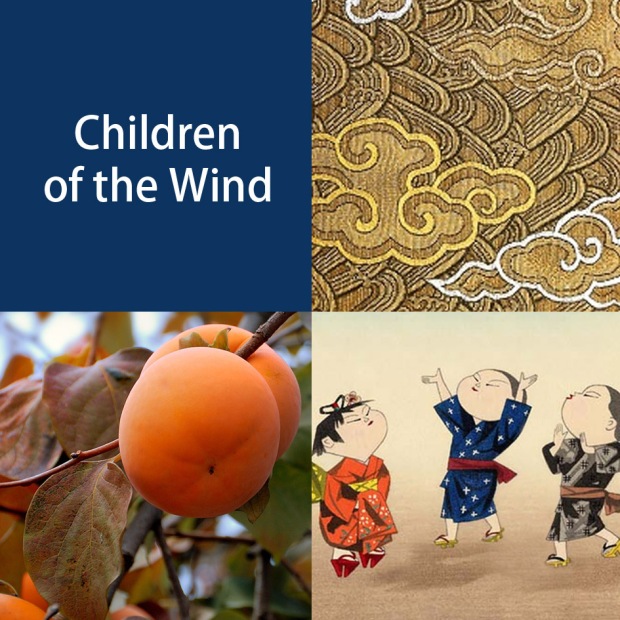 Once upon a time, in a simple village, one like thousand others across Japan, there were three children who loved to play outside.

The oldest, Kazuo, always tried to look older than he really was, his stern behavior somehow ruined by his ever-snotty nose. His sister Chiyo, though all gangly limbs, was a mean biter when rough-and-tumble called. And all knew that Nobu, the woodsman’s son, would blabber about everything and nothing for hours if you didn’t stop him.

Be it sunny or rainy day, as soon as their parents had turned their backs, all three would ran to the outskirts in joyful string of laughter.

One day, as they were round dancing, singing gleefully off-key at the top of their lungs, an unknown voice joined theirs.

The three friends stopped and turned. Half hidden behind a bush, blinking like a owl, was little boy they had never seen before.

Kazuo puffed his chest and called:

– Are you ill? Your skin is very red. Mine’s always like that when-

Rolling her eyes, Chiyo cut in like an angry boar:

– Are you… playing? I think I have never done that before.

The three friends exchanged shocked looks: a kid who had never played! Immediate pity blossomed on their faces. Kazuo declared, serious as a monk:

– We can show you is you wish.

And the strange child joined their games. For hours, all four played catch and tag, and laughed – and bickered a little bit.

– Mom says kaki are not ripe yet. Shame, I could eat a whole bucket right now!

As Kazuo and Chiyo agreed, the strange child quietly said:

– At home, fruits are ripe. Sweet chestnuts, and mellow kaki. We have some everyday.

He paused and smiled shyly:

– I could bring you there if you wish.

All three, already half drooling, nodded eagerly and the red child beamed.

He got up and untied his flowy belt. Then, putting the hands of his friends on the long, long fabric strip, he simply said:

– Hold tight and you won’t fall.

And he soared up into the sky.

Kazuo swore, Chiyo squealed, and Nobu shut his eyes tightly. Clouds billowed all around them, while the world below flashed and swirled.

As suddenly as they had taken off, the red child landed on into a beautiful orchard. As far as the eyes could see stood trees bearing fruits as colorful as precious jewels.

The red child eyes crinkled mischievously at his friends’ obvious delight. A warm gust of wind shook a persimmon tree, and fresh kaki gently roll to toward the mesmerized children.

Fingers gooey, lips sticky from sugar, they all eat and eat. Until thunder rumbled somewhere.

And he was gone, up, up, up into the dimming sky. Nobu’s yell got lost in the wind:

– Wait! How are we gonna get back home!

– I think we arrived from this way. Guess we’ll have to walk.

None of them had a better idea, and the three children hit the road. They walked amidst the seemingly unending orchard as the sun declined.

Before long, Nobu was whining:

After that, all three walked in silence, holding hands tightly in the dusk.

Between trees heavy with chestnuts, a pretty little house finally rose. A plump middle aged woman, bright as a sunny day, sat by the door:

Relieved, the children ran to her and babbled all at once:

– Auntie, auntie! We’re lost! Please help us! There was a child, and we played, and he flew us here to eat kaki, and he disappeared, and…

The woman seemed to darken like a thunderstorm. She turned toward the house and rumbled:

Four children appeared. A comely one had a luminous smile and a blueish skin, another was lithe, black and silent. The third was pale and had wild untamed eyes. And the last one was the red child.

– Which one of you have forgotten to bring his new friends back home?

The red child rose a timid hand. The lady sighed and bowed to the three children:

– I apologize deeply. My son, the South Wind is not mean but he always is such an air-head…

She throw a stern look at him:

– You, young man are grounded. And no « but ». You three, get those poor kids back to their parents, they must be quite worried.

The white child took Chiyo on his back and soared up, crackling like thunder. Soon, his dark brother carrying Kazuo followed in a cold gale, while the radiant one carried a paling Nobu muttering:

And they say that, from this day on, the children of the wind were often seem befriending children of men. And they never forgot to bring them back home again.

This cute tale plays on the imagery surrounding winds and cardinal points in Japan. If today, the most well known god of wind is Fujin, many more existed such as Shinatobe, an ancient female kami cited in the old Kojiki chronicles.

Today’s wind children embody asian traditional cardinal system. The South wind, minamikaze, is linked to summer and the red bird Suzaku. The North wind, kitakaze, symbolizes winter and the black tortoise/serpent Genbu. Higashikaze the East wind is linked to spring and blue/green dragon Seiryu. And the West wind, niikaze, is associated with autumn and Byakko the white tiger.

Chestnuts (kuri) and persimmons (kaki) have been the autumn fruits in Japan for centuries. Both are highly auspicious foods, sweet and nourishing. And I love when in late autumn colorful strings of drying kaki (tsurushigaki/hoshigaki) dot the countryside. On a side note, love for pears and apple is much more recent in Japan (it has only started to rise by the end of Meiji period).