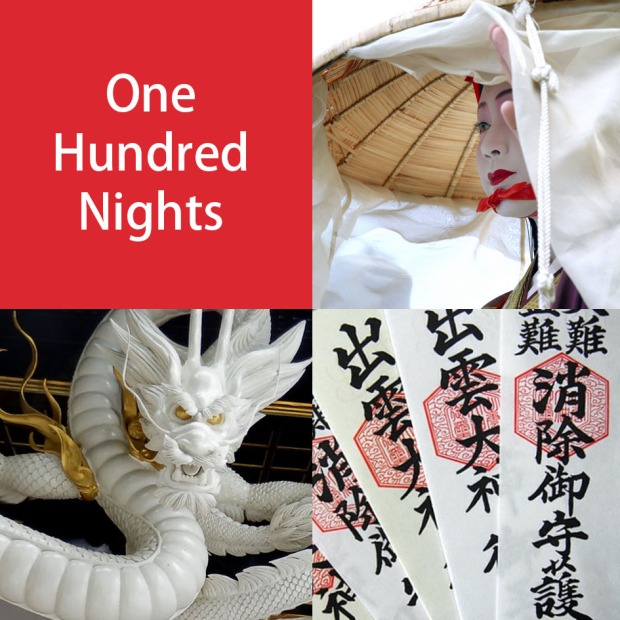 Once upon a time, there was a temple renowned far and wide across the land for its powerful amulets.

People came from remote villages just to buy a paper charm or a fabric amulet, hoping to fend off evil spirits of all kinds.

A lovely summer day, as dusk was settling, a woman came knocking at the heavy temple gates.

– Hello? Is anybody here?

The watchboy throw a look by the spyhole. The woman, richly dressed, had her features blurred by a long travel veil, her wide hat casting long shadows in the dimming light.

– We are closed for the day M’Lady. Please come back tomorrow. You’ll sure find accommodation in town.

– I’ve come from far, far away. Please, just sell me one amulet child and I’ll trouble you no longer.

She lifted her veil, and piercing black eyes peered at the boy.

The woman had a pretty common face, but her gaze sparked groundless fear in the watchboy’s heart.

Cold shivers running down his spine, he stuttered hastily:

– Our High Priest is out of town at the moment, and I take me orders only from him. Please, please come back later.

And he closed the spyhole, a bit more forcefully than truly needed.

A few days later, the High Priest came back from his pilgrimage. As he passed the door, merrily greeting all the monks and apprentices, the watchboy shyly took him by the sleeve and eyes casted to the ground, shamefully related his strange encounter.

The High Priest paused, seizing how the boy seemed genuinely shaken. He furrowed his brows and mused:

– Why would a rich woman travel by herself, and walk alone by dusk. That’s quite peculiar…

That same night, as he was meditating, the Buddha’s voice echoed in his mind:

– The boy was right to trust his guts. That woman is not human but a monster who came to eat you and ruin this temple holy grounds. For a hundred nights, make it waits before handing it one of your amulet, that the only way you’ll weakened this evil creature down.

The following evening, having caught word of the priest return, the woman appeared by the gates, still finely dressed, her long veil billowing in the night breeze.

– Please fetch your Master, I have come to purchase one of his mighty amulets.

The boy called for the High Priest. As he took a peep through the door, the holy man recalled the Buddha’s warning. He cleared his voice and said:

– I am sorry my Lady but we can just give you an amulet. You must prove your faith to earn it. Came back here and pray, pray a hundred times and yes, I’ll give you the most powerful charm we own.

The woman rose an elegant hand, delicately lifting her veil. Her bottomless black eyes were unreadable. Then, a sweet  smile suddenly blossomed on her lips:

From this day on, the woman came back each and everyday, always by dusk. She would knock at the doors and politely greet the monks. Then she would clap her hands and start to chant.

Summer passed and autumn settled in. Monks wondered: the lady had such an unwavering faith, why was the High Priest tormenting her so much?

Yet the holy man remained unmovable.

That morning, the High Priest and all the monk held a special service in the main hall. Reciting sacred sutras, they poured all their faith into a single paper amulet.

And just before dusk, the monks opened the temple doors, the High Priest ahead of them clenching the amulet tight in his hands.

The woman appeared as usual, a light spring in her gait, veil trailing behind her. Taking the procession which waited for her, she let out a delighted cry and nearly ran to the priest.

Beaming, she let a predatory smile slipped and extended her beautiful hand.

Yet, as soon as her hand brushed the amulet, the whole world shook.

The temple walls ripped opened, heavy wood torn as paper sheets, as shrieking the woman turned into a black beast, all gleaming fangs and sharp claws. The monster roared:

But before it could pounced, a flash of lightning fell for the Heavens, striking the amulet. The occult writings shivered and rose from the paper, turning into mist.

Between tendrils of smoke, a white dragon sprang, pinning the dark monster to the ground.

Dragon and beast fought, growling and hissing. But, one hundred nights of prayers had weakened the evil creature.

With a powerful swipe of its tail, the dragon managed to knock it down. Coiling around the unconscious beast, the dragon pulled it into the temple pond.

When the ripples finally stilled, white dragon and black monster had vanished into the water.

This story is a folk tale from Yamagata prefecture. The temple who saw the dragon descend to defend it is probably the Ryutokuji (“temple of Dragon’s benevolence”) which changed its name to honor its protector

The travelling attire worn by the monster appeared during Heian period and was called tsuboshouzoku. It was especially used by noble women in pilgrimage. Today, those large hats and veils are more commonly called katsugi (or uchikatsugi).

Amulets and charms (generally called mayoke) were and still are an important part of Japanese religious spirit. Many kinds exist: from elements weaved into architecture (onigawara and shachihoko tiles, ishigando tablets), to ritual decorations (shimenawa ropes, udzue bundles) and trinkets like suzu bells and small omamori fabric charm. This tale is about paper charms name ofuda, which are used to ward of all kinds of evil.