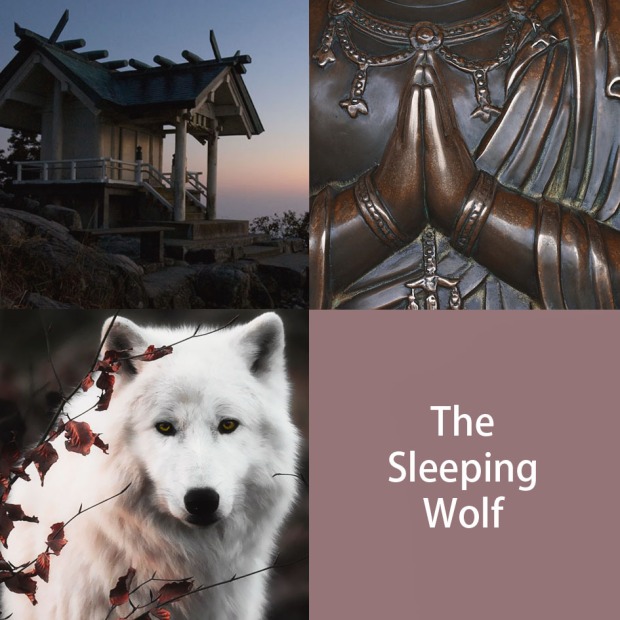 Once upon a time, there was a mountain monk who decided it was time to make his pilgrimage to a far away shrine. He packed the few things he owned and took the road, crossing valleys and fields until he arrived to a mighty forest.

It was an amazing place, beautiful and wild. A tiny little path went through the woods, sole evidence of the presence of men on those lands. The huge trees shaded the forest ground, turning the daylight into an eerie twilight. The monk summoned all his courage and went on his way.

He walked and walked for hours, dodging brambles and treacherous roots. Suddenly, he stopped dead in his tracks. In the middle of the little path, a wolf was asleep.

The monk opened his bundle and took out his conch shell. Tiptoeing, he approached the the wolf and when he was close enough…

… He blew the sacred trumpet as loud and long as he could.

The wolf had never heard such an awful sound. It sprang to its feet and ran away, his tail between his legs.

– That should keep me safe!

He kept going, and walked and walked, until the sun finally disappeared and twilight turned to pitch black night.

– If they are wolves in those woods, I can’t simply sleep there, unprotected…

The monk looked around and advised a big, welcoming tree.

– That will do. After all, wolves can’t climb!

He went up the tree and settled in a comfortable fork. Exhausted by his long day, the man quickly dozed off.

Yet, in the dead of the night, something moved in the bushes. The monk woke up, heart beating fast. One tail appeared, then two, then three. Soon a wolf pack was standing under the tree.

– Here is our mean little man! Old Fujiyoshi will bite you!

One beast came near the tree and gave a leg up to its packmates. The monk could not believe his eyes:

– Oh no, they are climbing! If they came higher I am lost!

He rummaged hastily through his bundle. His hand caught his trusty old knife. Just in time! A big white wolf had reached the fork and snarled viciously:

– I am Fujiyoshi, and you won’t attack one of mine ever again!

The monk quickly draw his knife:

– I don’t want you any harm, I just wanna cross your forest safely!

But the wolf had already pounced. Beast and man fought blindly until:

The big white wolf fell to the ground and immediately fled, followed by its friends.

The trembling monk could not believe his luck. Watching the shadows, he did not sleep a wink all night, but the wolves did not come back.

Finally, the sun rose. The man went down the tree and resumed his journey, walking as quick as he could. Soon, the dark forest was behind him and he arrived at a village of thatched roof houses. He greeted the villagers:

– Hello my good folks. I am a mountain monk on pilgrimage. Will you offer me a bowl of rice?

The villagers led him inside one of the houses. It was no more but a mere shack with a hearth and a bed. On the bed, an old woman was laying, a wet towel on her forehead.

– Grandmother, you seem quite ill. Let me pray for you, that’s the least I can do to thank you for your hospitality.

He sat at her bedside and started to chant. But, far from doing her good, the old woman got more and more restless, turning in her bed and sweating profusely. Suddenly, the towel dropped, revealing a patch of white fur and a deep knife cut on her forehead.

The monk jumped to his feet:

– No way! You, you are Fujiyoshi the wolf!

The old woman started to wail:

– The others, they don’t remember, but I do. I’ll never forget those rabid soldiers pillaging our village. I was not able to protect my people. Oh, will we ever find peace in those woods?

Under the wide eye of the monk, the old woman slowly turned into a mighty wolf. Outside the hut, villagers were now howling, a haunting and heartbreaking song.

– They’ve butchered us you know. And now we can’t rest. I am so tired little man…

The monk gulped down and put a shaking hand on Fujiyoshi’s fur:

– I could… try to lift your curse. Where… where are your bones?

Fujiyoshi looked at him straight in the eyes, both sad and hopeful

– To find them you’ll have to kill me boy.

Grimly, the monk squared his shoulder and took his knife. He muttered a prayer and swiftly, pierce the heart of the beast.

As Fujiyoshi let out her last breath, the air started to ripple. Soon, gone were the hearth, bed, and rice bowls. On the floor, there were now only dust and humans bones, old and bleached.

The monk joined his hand and bowed deeply:

– You’ve prayed for protection and the spirit of the wolf heard you. Rest in peace now brave Fujiyoshi.

The monk did not resumed his pilgrimage. Here in this remote place, he gathered all the bones of the villagers. Above their resting place, he built a temple which he dedicated to the Great Wolf..

And they say nothing bad struck those lands ever again.

As stressed in a previous tale, wolves are quite rare in Japanese stories. However, today’s one is a great example of the “divine power” archetype which is often associated with those animals in Japan.

Wolves are heavily linked to dangerous places such as mountains (they are sometimes called yama inu “mountain dog”). They can be deadly but most of the times, stories see them as benevolent spirits being great moral judges : they protect good people (be it lost travellers, farmers having pest troubles etc) and punish bad ones.

Mountain monks (yamabushi) are ascetic practitioners of the Shugendo sect. Impressed by their harsh lives, people traditionally think those monks have great occult knowledge and they were often asked to perform exorcisms. In this aspect, they are in fact like the male aspect of miko-shamans I have covered in this tale.

Conch shells are music instruments used by buddhist monks. In India, they are called shankha (horagai in Japan) and represent the potent power of Buddha’s voice. Like their city counterparts, yamabushi used those trumpets to accompany their chanting with intricate melodies. Conch shell sounds were also very useful to communicate across the land – be it mountains… or battlefields (samurai’s war shells were called jinkai).