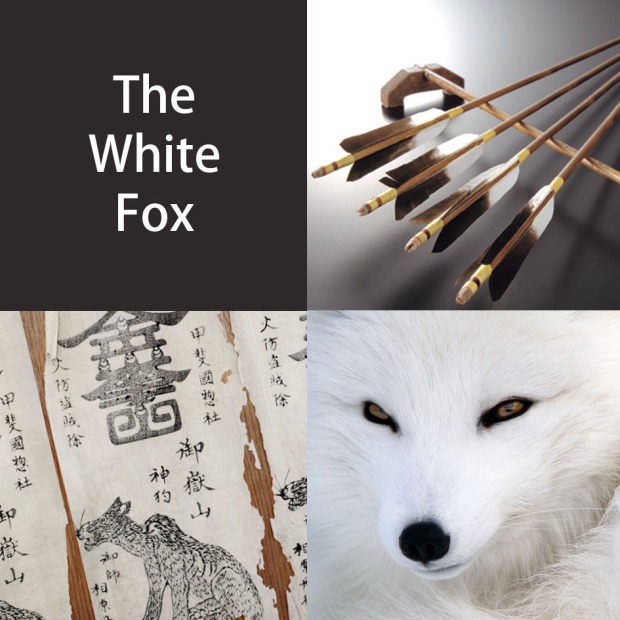 Once upon a time, in a faraway province of Japan, was a famous archer named Yazaemon.

The man was quiet and swift and his talent so great that the Lord of the land had appointed him Master of the Hunt.

One autumn day, as Yazaemon rode with the Lord along golden rice paddies, a white fox jumped out the bushes.

It was an amazing beast, gracious and lean, with bright amber eyes and a coat pale as moonlight.

– Such a rare beast! It must be mine! Lets chase it Yazaemon!

And so the hunt began. They chased the fox over the valley and to the forest. But the animal would not yield, always disappearing at the last moment in the thickets.

Finally, the bowman, silent as a shadow, cornered the poor fox under brambles.

The animal was panting. Its white fur was muddied from the race and blood beaded where thorns had torn its coat.

The hunter took a deep breath and bent his bow. Suddenly, something moved behind the fox’s hind legs.

A tiny white furball emerged from the brambles, soon followed by another.

The vixen looked at him pleadingly, large tears in her golden eyes.

– Go, but be quick. I’ll lead the Lord away from your family.

He had not yet finished his sentence that the vixen and her pups had all but vanished.

Back to the castle, the Lord was fuming:

– You’ve never missed a target, never! Yet, you’ve not been able to catch the most precious beast I’ve ever encountered!

The rich man gulped down his sake cup:

– What use do I have for a hunter like you! You’re fired!

Yazaemon was stripped of his fine clothes and the guards took his bow before kicking him out.

Outside, it was pitch dark. Shivering under his ragged kimono and penniless, the bowman settled for the night under a huge cedar.

Startled, Yazaemon jumped to his feet. In front of him, stood an ethereal woman, pale as the moon. Two youngs children hid in her robes.

– Go to the city. I swear I will repay your kindness there.

And before the man had uttered a word, the vixen had been swallowed back by the night.

When he woke up, Yazaemon could not believe his eyes. In front of him, spread the biggest town he had ever seen. He had traveled miles in one night.

For a year, he worked hard as an errand-boy. Yet, no sign of the fox could be seen.

Then one day, the plague hit the city. Doctors were helpless faced with this new evil. And Yazaemon did not know what to do to help his dying neighbors and friends.

One night though, the pale woman finally appeared again:

– The time has come. As a symbol of my gratitude, I offer you this amulet. This potent charm will help you heal the sick. Let me teach you…

The vixen’s voice dropped into a whisper. When he woke up, Yazaemon found in his hand a pearly white ofuda with strange markings. And he knew exactly what to do.

The former bowman encased the precious amulet in a wooden box. Then he went visiting all his neighbors, then his neighbor’s neighbors and so on.

As soon as a sick person touched the amazing box, they were miraculously cured.

Words of the extraordinary charm spread. And grateful patients made generous offerings to Yazaemon.

– Don’t please, I truly don’t need that much…

A rich man, Yazaemon decided to built a shrine so every sick man and woman, rich or poor, could come and be healed. And everywhere, one could find there statues of a white fox and her two pups.

White foxes are very auspicious in Japan. You can often found them in shinto shrines dedicated to Inari, as they are her messengers and servants. This association probably comes from the rodents hunting capacities of foxes, which made them great allies to guard rice! (If you look well, many Inari foxes statues hold granary keys in their mouths).

Some traditions stress that white foxes are females and black ones are males. Others simply considered black foxes as being nogitsune (malicious foxes not sworn to Inari). Old black foxes are also said to turn white when they gain their ninth tail.

Ofuda are shinto talismans, now most of the time strips of paper bearing protective words. They are thought to ward off bad things, from harm to diseases. You can find them attached to temples and shrine but also houses or objects. A popular form of ofuda is the omamori, a little fabric bag holding a small ofuda paper.

The choice of a bowman for hero is not random. Many superstitions surround bows and arrows in Japan. For example, you can still today buy hamaya (blessed arrows embodying the sacred bow Hama Yumi) used to ward of evil from your house during New year celebrations.