(An ASMR reading by Arcade-Hime can be found here) 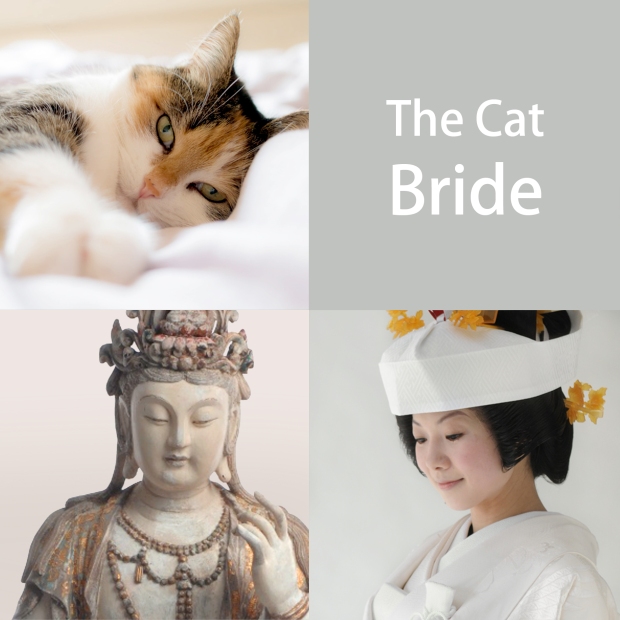 Once upon a time, a cat came to plead to Kannon, the Bodhisattva of compassion.

– I might be a cat, but every time I see a bride,oh how I’d like to be human myself and live as one of those beautiful girls! Oh Kannon, I beseech you: please, make me a human bride!

The cat prayed and prayed, day after day, month after month. Finally one night, a mighty yet soft voice echoed in the feline’s dream:

– Your prayers have been heard, dear cat. If you can act like a real human, I’ll find you a nice young man. Tomorrow night, in front of the temple gates, come as a human girl. If you prove yourself worthy, you’ll become a bride.

The young cat immediately ran to her parents to share the good omen. The pious cats cried and rejoiced and spent the day grooming and dolling their beloved child for the next evening.

On said time, the cat dressed as a human came to stand at Kannon’s temple, her proud parents trailing behind.

When people took notice of their party, they started commenting :

– Have you seen that girl ?

– What a beautiful young lady !

Until one young man, breathless and rosy cheeks, whispered to his father:

The young man’s family approached the beauty lingering at the temple’s gates. The father asked:

– Sweet lady, are you here waiting for someone?

– Oh my good sir, Kannon came to me in dream and asked me to stand here. I am waiting for my future husband.

The family, who had already be charmed by her looks, were entranced by her humble manners and quiet speech. The young man looked at her in awe:

– Really ? Fate sent you here then. To you I can admit: Kannon has spoken to me too: I was told that a young lady standing in front of the temple today would become my bride.

The young couple blushed while their parents exchanged a look. The young man’s father smiled and said:

– If you wish it so, we’ll be happy and proud to have you join our family.

The cats in disguise led the human family to their old yet respectable house, behind Kannon’s temple. Bowing deeply to the humans, the cat father said :

– I thank Kannon for your visit. But, as you can see, our home is poor. And though we cherish our girl, we haven’t been able to make all of the necessary wedding preparations.

– It’s alright. Being together is the only preparation really needed. Besides, we are not that much richer than you are. This will be a good wedding.

After the human family went back home, the cats shook back to their true forms. Their old house, while still respectable, had turned back to a mere stray cat shelter. The cat daughter immediately went to the temple:

– Thank you Oh Kannon, for your guidance and help. Tomorrow I’ll be a human bride!

– I am pleased. Now remember: if you are to become human, you’ll have to forget all of your old feline habits.

The night of the wedding came. While the cat daughter dressed in her wedding kimono, stray cats disguised as humans were preparing for the feast.

Once ready, the bride to be took her place in a palanquin, and the procession departed at the light of joyful lanterns.

They all gathered at the human house and the ceremony started. Bride and groom were happy looking, as were their families. The 3 sake cups were being passed, each future spouse taking a sip to take their vows.

Yet suddenly, beneath one of the trays placed in front of the bride, came a tiny mouse. The cat bride swiftly sprang up:

Humans guests turned with wide eyes at her pouncing figure. And someone started shouting:

The whole bridal party suddenly jumped out of the parlor, turning back into cats as soon as their feet touched ground.

The bride herself shook her disguised and quickly disappeared, without forgetting the unfortunate mouse.

The groom and his parents ran to the cat’s house. But behind Kannon’s temple stood only a vacant house and not a soul could be seen. The humans were seething:

The stray cats kept living near Kannon grounds, lurking in the temple, munching on mice threatening the sacred texts. And one day, the cat daughter heard the Buddha’s voice:

– Cats are cats and humans are humans. Think about it child: how happy would you have been with such a human groom ?

In Japanese tales, cats youkai are often depicted as dangerous spirits (bakeneko, nekomata), often associated with death and revengeful women (Mononoke/Ayakashi serie has good example of those stories). The Cat Bride tale is very interesting as it shows a lighter side of magical cats.

In buddhism, the ultimate goal for a soul is to escape the samsara (circle of reincarnations) and finally achieve enlightement.

That what is at play in this story. The little cat will probably need patience but her attitude is getting better. On the other hand, the human family of the tale is getting bad karma because of their behaviour. No doubt their next reincarnation will be one step back!